This Temple of God: Clean Eating and Emotional Detox 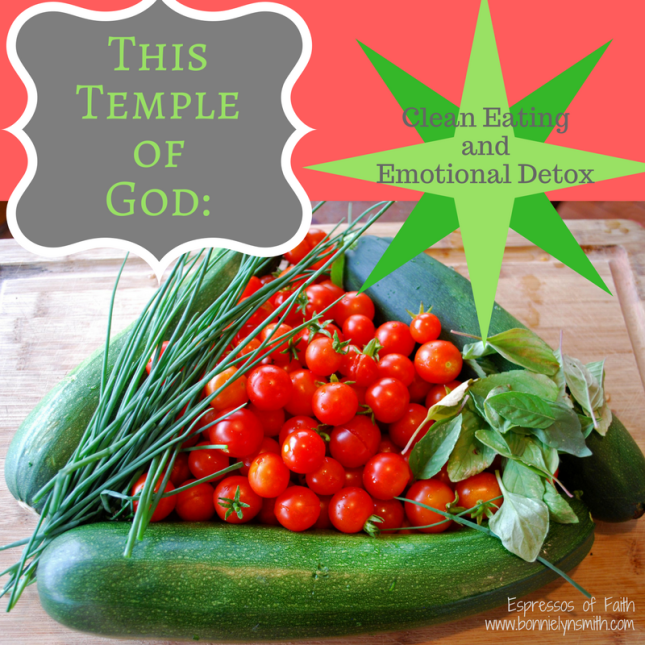 Almost two years ago, my father passed away. Right around that time, my oldest child, an older teen, started a cold-turkey diet of eating clean: no sugars, no preservatives, and organic whenever possible. Mostly fruits and vegetables. Lean meats. He claims there was no connection to my father’s unrelenting battle with seven cancers over four decades. That’s okay. My mother’s heart saw something in that choice that spoke of legacy, taking control where there wasn’t any, and making sense of loss—maybe with some growing health consciousness added to the mix.

At first I was resistant, almost angry. For years, I had spent so much of my time accommodating major food allergies in my youngest child, that meal planning and cooking became a nightmare. On the flip side, it served as the first attempt our family had made to eat more natural. (We were also living in the middle of the South Pacific, but that’s a story for another day.)

Fast-forward eight years later, and here we were: accommodating one child who wanted to be healthier (and who could argue with that?) while the rest of us still had processed food and sugars, just as much as we had any fruits (and sometimes vegetables). Pasta was my go-to. Produce was washed but certainly not organic. Salads—even attractively dressed ones—were not my friends.

Not only did it take me at least a year to adjust to the cost difference of eating healthier, I also had to train myself to limit what I purchased from the center grocery aisles. Everything is fresh in the perimeter; stick to the perimeter! And can I lament for one minute about the condemnation I felt as my hyperaware teen health nut watched the rest of us indulge in unhealthy choices! It was a year of my fighting back, defending my choices, and pointing out that we don’t all have to change just because he decided to be OCD about labels. And he was. I would go out of my way to buy something I thought was all-natural only to find out they snuck in a chemical imposter! I was not a happy girl!

Since that time, especially after the one-year mark of these changes in my son, I began to END_OF_DOCUMENT_TOKEN_TO_BE_REPLACED

Posted by Bonnie Lyn Smith on May 4, 2018 in Drawing Healthy Boundaries, Essential Oils and Healthy Living, Renewing Our Minds, Walking in Peace