Lazarus Moments: Trusting God With Decay in Our Lives

I kicked, slammed my body onto, and punched the dishwasher. It had spent the past six months vacillating between functional and dysfunctional. We would get about 15 good cycles out of it, and then it would suddenly start turning off after loading the first water cycle. No cleaning—only wasted water. Some days I would restart it 10 times. We were not friends. On those days I would hand-wash the build-up on the almost-nonexistent countertop while trash-talking my limping, lame appliance for deceiving me once again into thinking it was revived, healed, restored, capable. Nothing I could do in my own strength could make that confounded piece of plastic do my bidding.

Then, for two weeks, my husband and I taught our Junior High Sunday School class, focusing on the content-rich and highly symbolic account of Jesus raising His friend Lazarus from the dead.

Now when Mary came to where Jesus was and saw him, she fell at his feet, saying to him, “Lord, if you had been here, my brother would not have died.”

When Jesus saw her weeping, and the Jews who had come with her also weeping, he was deeply moved in his spirit and greatly troubled.

So the Jews said, “See how he loved him!”

But some of them said, “Could not he who opened the eyes of the blind man also have kept this man from dying?”

There are a few key points to mention before we make a crazy connection between the dying dishwasher and Lazarus—and our lives in general. END_OF_DOCUMENT_TOKEN_TO_BE_REPLACED

Posted by Bonnie Lyn Smith on March 28, 2017 in Ministry Moments, Relationship with God, Renewing Our Minds

Tags: before the miracle, brokenness, decay, glory of God, grief, John 11, Lazarus, Lazarus moment, new life, new life in Christ, raising the dead, resurrection and the life, revival, set you free, sets you free, state of decay, Unbind him and let him go

Pulling Vines: Landscaper of Our Hearts 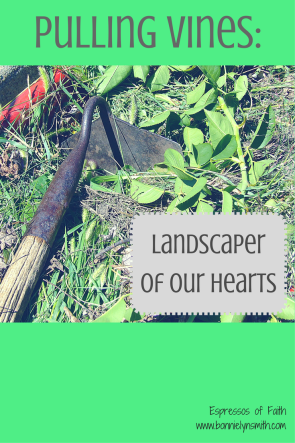 Pulling with everything in me, I grabbed hold of some stubborn vines declaring war on my pachysandra and yanked away. The morning sun beat down with increasing intensity and my muscles pulsed in ways they hadn’t all winter, yet my focus remained steady and determined.

I’ve had enough of weeds choking me over the years. They crept in silently. I would ignore and eventually get used to them, not really seeing how big they were becoming—until one day I couldn’t see past them. I was horrified how they seemed to tower over all healthy growth in my life.

The same was true when I went to the mailbox one day. I saw an overgrown, out-of-control forsythia bush and almost didn’t recognize my own yard. My stomach turned. I was disgusted that I had let my lawn get that trashy, that I lost my vision for intruders, and that I’d let my guard down, given up, lost my fight.

I look back to a year ago when the repercussions of years of long drives to therapy, IEP battles, and the never-ending search for new answers, avenues to explore, and home coping strategies for one END_OF_DOCUMENT_TOKEN_TO_BE_REPLACED

Posted by Bonnie Lyn Smith on March 23, 2017 in Grace in Big Gulps, Ministry Moments, Relationship with God, Renewing Our Minds

Tags: abide in the vine, apart from me you can do nothing, blessed be the name of the Lord, I am the vine, Jesus the vine, Job 1:21, John 15:5, landscaper, landscaping, naked I came from my mother's womb, pruning, pulling vines, The Lord gives, The Lord takes away, true vine, yard work, you are the branches

Are You Collecting Spoons?

In the middle of my van, right behind the driver’s seat, I keep a small crate in which I store items I need throughout the week: two Bible study workbooks, the latest coupon book for BJs, a catalog for The Paper Store, karate belts, and the Junior High Sunday School attendance clipboard. If I am stranded in the cold weather in the next few months, I may not have a blanket to keep warm or a flashlight to light my path, but I can study the Bible, clip coupons, window shop, and impersonate a brown belt!

For about two weeks, whenever I opened the van door, I saw a metal serving spoon poking out of my “car office” crate. It almost seemed to taunt me. For various reasons and meetings, I had been at my church about four times since taking the spoon home to clean after using it for Sunday School, but I kept forgetting about it.

My crate is supposed to be a placeholder for me, a reminder, a way to stay organized. And yet, despite my best efforts to keep everything in its proper place for the right time, that spoon got the best of me. For the life of me, I could not remember to return it to the church kitchen drawer. I held onto it, transported it all over the local area, and

carried something I did not have to.

Cast your burden on the LORD, and he will sustain you; he will never permit the righteous to be moved.

I don’t know about you, but it usually doesn’t take me long to grab a burden, sling it over my shoulder END_OF_DOCUMENT_TOKEN_TO_BE_REPLACED

Posted by Bonnie Lyn Smith on March 20, 2017 in Ministry Moments, Relationship with God, Renewing Our Minds

Tags: advocacy, bear his own load, bearing burdens, caring for others, carrying burdens, cast your burden, Christ is the answer, codependence, daily bears us up, galatians 6:2, God's presence, helping others, His yoke is light, Matthew 11:28, our salvation, Psalm 55:22, Psalm 68:19

When You Can’t Force Conflict Resolution 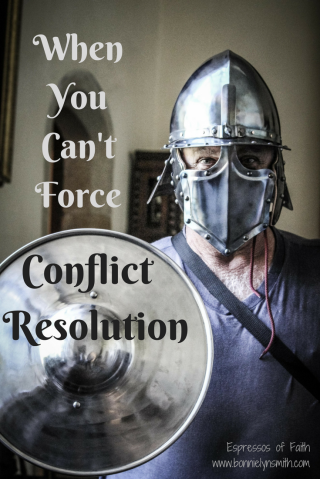 When there is relational conflict, is waiting a copout?

I would say that sometimes it can be, but there comes a point where we have to realize that even if we’re ready to move forward and heal with someone, we can’t force healing and readiness in others.

I sat across from her pleading with my heart and eyes to offer me a different answer. She could not. She confirmed what I had been hearing from God in my prayer time:

Me: “I want to, but I can’t offer peace in this situation.”

Person offering me counsel: “Why do you think that is?”

Me: “Because I didn’t take it away in the first place. My actions did not cause any of it. They need to seek peace through and with Christ. Until they surrender that, I cannot offer what they seek, and I don’t want to go ahead of what God wants to do in each person’s heart. Besides, I would only screw it up since I do not have His peace to act on this right now.”

Person offering me counsel: “Then that’s your answer. You’ve prayed. You’ve sought godly counsel. You’ve daily surrendered this. You are so right to not go ahead of the LORD. He cannot be rushed.”

And that settled it in my heart—what, in many ways, I already knew:

#WaitingOnGod in a situation does not equate to abandonment.

While the reassurance came from another Christian, I needed to check myself with God. God would not END_OF_DOCUMENT_TOKEN_TO_BE_REPLACED

The Blue Armchair and the Presence of God 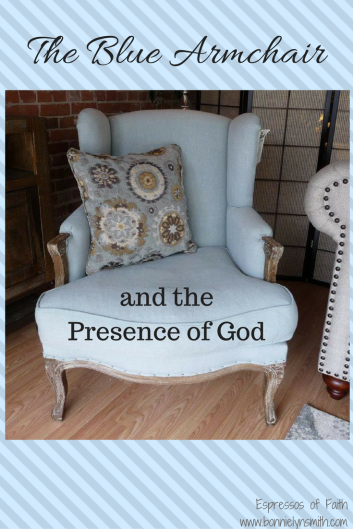 I could feel his presence as I entered each room. He had only been gone one year; past conversations and memories bopped around in my mind—random flashes of the past with no clear timeline. Dad making himself known in my heart and thoughts. His love was tangible. The house was pregnant with his solid faith and unconditional love. We missed him terribly, but we walked the legacy he set in place before us. With each step of remembrance, I felt his nod of approval, his pleasure.

It was the first time in his home since he had passed. I was so relieved his blue recliner chair was there, the leather worn in places where his hands used to push forward to fold out for a nap. The seat of it revealed the wear of a consistent presence like the dent in a blanket left by a warm dog after it gets up and stretches.

During some of our last visits, an external bladder pouch sat next to him on the floor, taking the role his cancer-ridden organ used to play. Sweet as he was, he used to ask if it would upset my children to see it. I was honestly glad they did. They remember the battle he fought so courageously and the toll it took. His robe would hang slightly open where the tube delivered its contents to the pouch on the floor. None of us minded. At the time, we were so grateful he was still with us.

I can’t look at that chair without seeing the red-white tufts of hair poking out over its high back or the freckled, hairy, lanky arms sitting on the armrests.  END_OF_DOCUMENT_TOKEN_TO_BE_REPLACED

Posted by Bonnie Lyn Smith on March 14, 2017 in Grief and Loss, Ministry Moments, Relationship with God

Tags: 1 John 4:16, abides in love, abiding in God, death, Deuteronomy 31:8, Dwelling place of God, exodus 33:14, Fullness of joy, God is love, God is near, God with us, God's presence, grief, i will give you rest, immanuel, Lord goes before you, loss, mourning, presence of God, Psalme 23:4, relationship with God, Revelation 21:3, valley of the shadow of death