A Lesson from Life on the Prairie

Over school breaks, my family likes to binge-watch some of our favorite television series. We are a bizarre mix of interests: everything from science fiction to historical drama. We are huge Doctor Who fans, and recently, I introduced my two younger children to LOST. At the time that show first aired, our family had made a decision to accept a temporary post in the Marshall Islands for a few years. LOST became a reality to us in more ways than one, but that is a story for another day. My tween son really enjoys The Flash.

When she can manage to find the time, my daughter loves following Little House on the Prairie, which takes me back to my childhood. My mother and I have vastly different emotional wiring, but the end of a Little House episode was one of the few times I would see her shed tears. As an adult now, I think I understand why. The wholesome, Christian values presented in every crisis on the show are the end goal, right? They show what we should aim for, more or less, but also where we currently fall short. Whatever he was in his personal, real life, the actor who played Pa Ingalls brought an ideal into our living rooms each week.

My stoic daughter sees this as a bit overdramatic at times, and perhaps it is. But for me, Pa’s tears are a huge relief.

Life hurts. We fail at times. We can’t control other people or outcomes. And wayward children/teens/adults often have to learn the hard way.

We have made our way (after many years of intermittent watching) to Season 9, the final season, and in it, Pa’s adopted son Albert starts experiencing negative behavioral changes. He is hanging out with the wrong crowd, needing acceptance, and in the city life, he falls prey to a morphine addiction. Pa does what he can to change the environment to give him a new start; they temporarily move out to Walnut Grove again, but taking the addict away from the temptation does not produce a cure.

When I entered our family room, I caught a scene where Pa locks Albert END_OF_DOCUMENT_TOKEN_TO_BE_REPLACED

Posted by Bonnie Lyn Smith on January 12, 2018 in Grace in Big Gulps, Relationship with God, Renewing Our Minds

Tags: 2 Corinthians 5:17, Albert Ingalls, being made new, Charles Ingalls, detox, forgiving, he was lost and is found, healing, Hebrews 4:15, high priest, His purposes, Little House on the Prairie, Luke 15, morphine addiction, new creation, New Year, Pa Ingalls, prodigal son, purposes of God, re-creating, restoring, tempted as we are, the new has come!, the old has passed away

Parenting in a Coffee Shop [Excerpt from “Not Just on Sundays”] 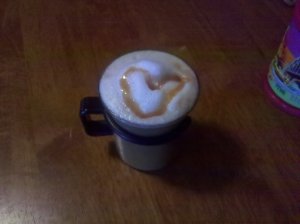 Espressos of Faith offers another excerpt (below) of Not Just on Sundays: Seeking God’s Purpose in Each New Day. One section of the book focuses on coffeehouse stories where life slows down to observation mode, and much can be reflected upon in both the quietness of being still and the white noise hum of sitting in a public space. A great amount of parenting is also done there—both my parenting of my own children and my listening to the Father parent me. Pull up a chair with me for a minute, and imagine (or remember) these moments with your own children. Take a minute to find some rest in your day. Thanks for joining me!

I enjoy being in a coffee shop for various reasons: to write, read, observe people, talk to a friend, treat someone to a pumpkin latte, etc. Of course, I can come up with almost any excuse to sit in one for a few hours. Really, just smelling the coffee alone calls me in like a beacon. I feel like I’ve finally made it to the mother ship when I smell fresh beans grinding or brewing. But some of my very best parenting moments also happen there. When a child has a particular issue to talk out, we can focus on each other better, away from home, in a different setting. If one of them has a challenging project, I will take that child for a muffin or decaf iced latte to help him or her focus and break down the task into smaller pieces. Several years ago, I took Chickie to a local coffeehouse to plan out her report on fairy tales. On other occasions, we have come just to de-stress and play some Skip-Bo®. During those times, the kids tend to share more of their lives with us.

END_OF_DOCUMENT_TOKEN_TO_BE_REPLACED

Posted by Bonnie Lyn Smith on September 3, 2014 in Journey to Publication: Excerpts from "Not Just on Sundays", Lotsa Latte, Tweens/Children

Tags: 2 Corinthians 5:17, coffee shop, coffeehouse, he is a new creation, in Christ, latte, parenting moments, Starbucks, the new has come!, the old has gone, time with God