RSS
← 10 Ways I Cope Through Deep, Dark Winter
To Be Called by Name →

A Lesson from Life on the Prairie 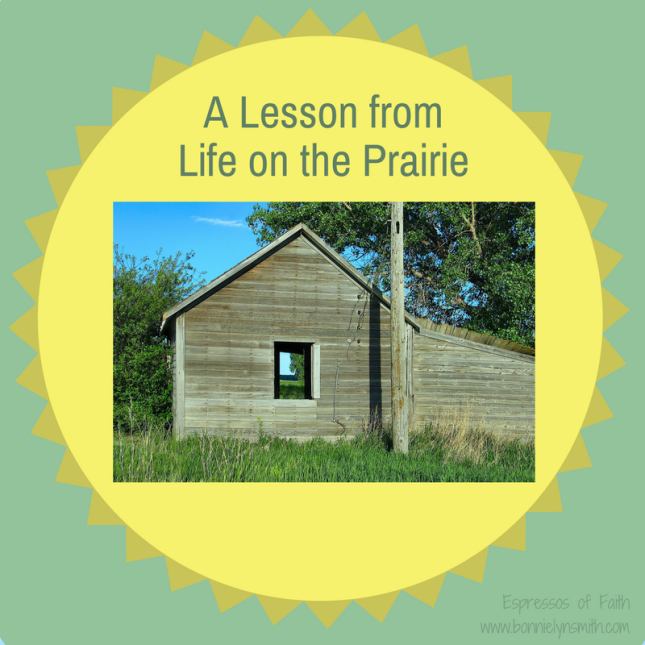 Over school breaks, my family likes to binge-watch some of our favorite television series. We are a bizarre mix of interests: everything from science fiction to historical drama. We are huge Doctor Who fans, and recently, I introduced my two younger children to LOST. At the time that show first aired, our family had made a decision to accept a temporary post in the Marshall Islands for a few years. LOST became a reality to us in more ways than one, but that is a story for another day. My tween son really enjoys The Flash.

When she can manage to find the time, my daughter loves following Little House on the Prairie, which takes me back to my childhood. My mother and I have vastly different emotional wiring, but the end of a Little House episode was one of the few times I would see her shed tears. As an adult now, I think I understand why. The wholesome, Christian values presented in every crisis on the show are the end goal, right? They show what we should aim for, more or less, but also where we currently fall short. Whatever he was in his personal, real life, the actor who played Pa Ingalls brought an ideal into our living rooms each week.

My stoic daughter sees this as a bit overdramatic at times, and perhaps it is. But for me, Pa’s tears are a huge relief.

Life hurts. We fail at times. We can’t control other people or outcomes. And wayward children/teens/adults often have to learn the hard way.

We have made our way (after many years of intermittent watching) to Season 9, the final season, and in it, Pa’s adopted son Albert starts experiencing negative behavioral changes. He is hanging out with the wrong crowd, needing acceptance, and in the city life, he falls prey to a morphine addiction. Pa does what he can to change the environment to give him a new start; they temporarily move out to Walnut Grove again, but taking the addict away from the temptation does not produce a cure.

When I entered our family room, I caught a scene where Pa locks Albert inside a small cabin with only himself to weather the detox process. When Albert breaks loose, Pa gives chase, ever running after his son, his adopted child, and tackling him to the ground. When the son begs him to procure morphine from the prairie doctor, Pa is clear that Albert brought this pain and suffering on himself by flirting with that poison in the first place, but he reassures him that he will never stop helping him defeat it. He is there for the long haul.

Upon returning to the cabin, Pa holds Albert as he violently shakes, projectile vomits, and pleads for relief. In this scene, he pulls what my daughter affectionately calls a “Pa Ingalls.” He cries over his son’s agony.

I know Pa’s character was never supposed to be Jesus. Certainly, he is flawed and falls short of the glory of God (Romans 3:23). But can you see the parallel?

Look at this parable of the prodigal son. The younger son had squandered all of his inheritance in sinful living but later humbled himself to return to his father in shame.

And he arose and came to his father. But while he was still a long way off, his father saw him and felt compassion, and ran and embraced him and kissed him. And the son said to him, “Father, I have sinned against heaven and before you. I am no longer worthy to be called your son.” But the father said to his servants, “Bring quickly the best robe, and put it on him, and put a ring on his hand, and shoes on his feet. And bring the fattened calf and kill it, and let us eat and celebrate. For this my son was dead, and is alive again; he was lost, and is found.” And they began to celebrate [emphases mine].

The father shows compassion. He runs after his child. He accepts him—sin and all—as repentant. Not only that, he celebrates him!

If you know the story, the rule-following older brother is not too happy about this reaction, and I’m sure a few folks can relate to that. So often we feel the screw-ups in life get a free pass, don’t we?

Oh wait, but then, at some point, we realize that we, too, are writhing around in our own pits of sin like Albert. And we, too, have a Father holding us firmly in strong, enduring arms. If we trust Christ, we are not alone. He is with us, forgiving, restoring, healing, and re-creating us into new creations.

Therefore, if anyone is in Christ, he is a new creation. The old has passed away; behold, the new has come.

God walks alongside the sinner. We have a Savior who came to earth as a man, tempted as we were.

Hebrews 4:15, ESV For we do not have a #highpriest who is unable to sympathize with our weaknesses, but one who in every respect has been tempted as we are, yet without sin.

We have God-come-to-earth as His Son Jesus who wept for the lost, for those who didn’t recognize Him for who He was. He had compassion on those about to send Him to the cross.

As he was drawing near–already on the way down the Mount of Olives–the whole multitude of his disciples began to rejoice and praise God with a loud voice for all the mighty works that they had seen, saying, “Blessed is the King who comes in the name of the Lord! Peace in heaven and glory in the highest!” And some of the Pharisees in the crowd said to him, “Teacher, rebuke your disciples.” He answered, “I tell you, if these were silent, the very stones would cry out.”

And when he drew near and saw the city, he wept over it…

As I saw Pa Ingalls in the trenches of a war against his son’s body, mind, heart, and soul, I saw a picture of God, the only righteous One who covered our sin on that cross and took the hits of death for us. He took it upon Himself and in humanity suffered unto death. The same God who cried for us. The One who saw beyond our darkness and viewed us as new creations because of what He did for us.

If you have been or are currently in the clutches of sin, the New Year coming is a great time to trust God to help you break free. What is holding you back? What chains still bind you?

If you don’t know Christ, this is a time to become that new creation He made possible. A clean slate. A tearful, but joyful, “Welcome home, My son, My daughter” from your Father in heaven!

If you already trust Christ, where are you still feeling like a captive when you are not? What sin/temptation/insecurity/deception has you wanting to take a shortcut instead of letting His light and truth in to reveal that He already broke off your chains?

Season 9 ended the story of Pa and Albert. I don’t know what became of Albert long-term, but I know that he had a father at his side willing to love him through every step.

The same is true of us.

Start by giving Him your 2018. Make it the year you give Him all of yourself. Take the areas you quake with fear or sin or other oppression, and submit to Him. The fear many have in trusting God is losing independence, but I’m telling you:

There is no greater freedom than trusting Christ with all of who we are and inviting Him to shape something new for His purposes.

God’s blessings to you!

If we trust #Christ, we are not alone. He is with us, forgiving, restoring, healing, and re-creating us into #newcreations.

*This blog was first a featured column at Your Tewksbury Today.

Anecdotal stories about an everyday relationship with God can be found in Not Just on Sundays: Seeking God’s Purpose in Each New Day (includes Book Club Discussion Questions).

Posted by Bonnie Lyn Smith on January 12, 2018 in Grace in Big Gulps, Relationship with God, Renewing Our Minds

Tags: 2 Corinthians 5:17, Albert Ingalls, being made new, Charles Ingalls, detox, forgiving, he was lost and is found, healing, Hebrews 4:15, high priest, His purposes, Little House on the Prairie, Luke 15, morphine addiction, new creation, New Year, Pa Ingalls, prodigal son, purposes of God, re-creating, restoring, tempted as we are, the new has come!, the old has passed away

← 10 Ways I Cope Through Deep, Dark Winter
To Be Called by Name →