Texting: Can We Raise Our Kids From a Posture of Fear? 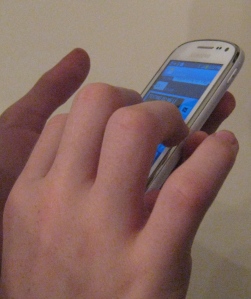 About a year ago, I had a discussion with Kid 2 (then age 10) about internet safety. Computer use at home is always in our line of sight, and really, only certain sites are approved by us. Searches need to be educational in purpose and have our okay and assistance. But it’s a good reminder what awful stuff awaits out there and why we have to guard our minds and eyes. It’s not really a very safe place out there. “Stay on the sidewalks I draw for you, Child, so you don’t get hurt. If you step off, I can’t protect you, and there’s no turning back or erasing that kind of scariness or darkness from your mind.”

In the meantime, I had a very conscientious and caring parent in my circle of friends raise an interesting question recently about navigating the texting world with our teens and tweens, and I feel it is such a valid concern so many parents of teens—and nowadays tweens—face, I wanted to discuss it blog-style.

People may disagree with me, and that’s okay, but I feel like the world of texting is actually an open garden of practicing social responsibility as well as building trust with my children, when done correctly (and at the right ages—the “right” age being something we parents may differ on). My oldest has had an iTouch since Christmas of his 6th grade year. He isn’t a phone talker (which I celebrate, since I’m not either), and he isn’t much into emailing, but the quick text-fests he and his friends occasionally engage in offer a space where he can practice so many things.

(As a side note, we agreed to him getting the highest-memory iPod Touch he could get at the time because he would use the memory for his deep love of music and a few apps, but only if he saved and paid half of it himself. That was about a year or more of saving. Paying for half made us feel more justified in using the iTouch as leverage the few times we needed to, and it also got across the greater message that while he saved up and persevered to earn something, during the time that he continues to live with us and be otherwise provided for, nothing that expensive is so much in his ownership that we can’t remove it when the attitude needs adjustment. And as a result, we have rarely had to remove it. He understands that while he alone uses it, it’s still only half his. We stumbled upon this concept by trial/error in our parenting. It worked with the iTouch anyway.)

My kids know that when they text or email:

1.) They need to write it as if all parents are watching, and in most cases—we all are.
2.) In general, photos of people should not be sent, at least not without me reviewing it first and only on very rare occasion.
3.) Content needs to be edifying.
4.) Conversation needs to be pure.
5.) It’s not a place to share confidences/secrets.
6.) We, parents, have all passwords and can check at any point to see what the conversation is about.

I would never embarrass my child by referring to it to anyone else, but I do reserve the right to spot-check.

I am not afraid of letting him text because, if I’m committed to spot-checking it, it more or less creates an open window into his world: What are they talking about? thinking about? paying attention to?

So, I choose not to parent from a posture of fear on this one—caution and monitoring: yes, but fear: no. I choose to roll with the latest technology and put up the right safeguards and lessons to make it another place to teach my children. I don’t love everything about it, but there is good to be gleaned from it, if we’re deliberate in our parenting.

That said, sometimes we have a child who is more defiant and strong-willed. Sometimes we have to pull the rug out on his/her communication until he/she is more respectful. I call that boundary-parenting and good discipline, and not fear-based. Fear-based parenting* says everything is scary and needs our handholding through it, to the point we can’t let go, and we miss the chance to have our kids learn greater independence and responsibility.

And let me end by saying that handing a 10 year old a texting device is completely different than giving one to a 13 year old; obviously, there would have to be more structure and monitoring to go with the younger ages. No judgment on anyone else whatsoever, but in our house, my kids have to be almost 12 before any texting device becomes part of their world, and any emailing before 12 has to be approved by me before it gets sent. But if you have a younger peep with a device like that, then I of course support more structure, rules, and checking. It’s not about the age, so much, as it is about how willing are you to be on top of it? I personally wasn’t willing to “go there” until they were on the edge of teen and until they had navigated enough in-person social conflict to manage digital communication as an extension of that—an additional challenge.

To me, the scariest thing about texting isn’t the device in my own kid’s hand; it’s the unmonitored device in the hands of another. Like anything else, all I can do is teach them how to avoid pitfalls, be wise, protect themselves the best that they can, and tend to their own character.

Even if your rules are different than mine, what has worked for you on this issue?

*Great references for fear-based versus grace-based parenting can be found below:

Chip Ingram is a wonderful resource for parenting in this new high-technology age and can be found at:
http://livingontheedge.org

One response to “Texting: Can We Raise Our Kids From a Posture of Fear?”