Slice of Freedom: Eating Pizza for the First Time 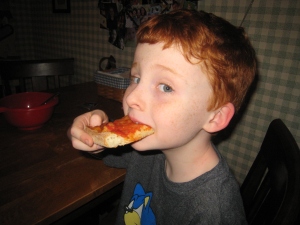 I was at a meeting at the dance studio the first time he said, “Can I have some pizza?” I had to ask him to repeat what he said because I was incredulous. He had been set free, through prayer, of his dairy (and other) allergy for a while now, but fear still sometimes prevented him from trying to take in too much. He had been medically tested to back up (for school purposes) what happened through prayer, and we took a cautious approach, introducing a small amount at a time. A tiny smear of cream cheese here, a piece of shredded cheese there. But pizza had not been of any interest to him up to this point.

Backing up…a lot of people who are bold in their faith of healing prayer encouraged us to have him chug glasses of milk. Actually, we had him rub it into his skin first, on the day of the prayer, and then let him swallow a bit of milk. At that point in time, before prayer, he would break out into hives just from his hand touching spilt milk and projectile-vomit any swallowed milk. On the day he was prayed for, he was fine on both counts, but we did not press him to take in more than he wanted to. And while other people’s faith seemed greater on our behalf, and I’m so thankful for them, we ourselves were only just starting to not clench too hard to the epi pen in moments like this one. For better or worse, we needed more faith history in this. And for a while I beat myself up for not wanting to feed him a dairy-only diet for the days following to prove something to myself and to strengthen my faith, but I didn’t need to prove anything to God. He knew my slow unclenching of the epi pen and testifying to each brave new step we took was me yielding, submitting, and learning to trust Him more. Had I rushed into it, I would have missed steps along the way where I needed to learn more about Him. Others may embrace this boldly because their lessons were already learned. For us, there was a story of trust and deep faith being written, and we were the main characters in it.

Back to where we were on the day that changed dietary history in our home with just a simple slice of pizza: We had broken from our event planning meeting (for an upcoming fundraiser) to order some pizza. And Little Man decided this was the day he’d like to try it. I have to admit, 7 months after being released of these allergies after years of them ruling our lives, my first thought was to look to see if the epi pen bag was with us. Knee-jerk reaction. If that shows a lack of faith, I guess you could consider me still a work-in-progress then. I’m just being honest. We lived in fear for years. We were still pushing fear out the door. God had taken it, but we still thought we saw the phantom of it taunting us for a long time.

So, with two of my good friends as witnesses, Little Man took a few bites of that cheesy goodness. Nothing. No belly ache, no vomiting, no hives, no difficulty breathing. I actually think we started with crust, but he convinced me to move on to the cheesy part—my reluctance and not his. This is how I knew in that moment that God was offering peace. Because my son not only expressed interest but was peaceful and eager to ingest something formally seeming like poison to his physical body.

So, I think we let him have two pieces that day. I’ve never seen a kid so happy about anything—not Christmas morning, not a vacation, not the swimming pool opening for the season. He had just discovered pizza at 7 years old for the very first time, and he was head-over-heels in love.

What followed were about 10 days of nonstop pizza eating. I admit that I indulged it. I gave it to him anytime he wanted it: at breakfast, Ellios frozen pizza, Dominos, local pizza places, etc. Every few days we tried a new topping. He was caught up in some kind of heavenly experience. He talked about it at bedtime: “Mom, what kind of pizza can I eat next? Should I try sausage or pepperoni?” It was so fun to watch.

But what also followed were 10 days of his body learning to process the pizza. Mostly our house just needed a lot of air freshener and open windows in those days. I’ll leave it up to your imagination. He wasn’t sick. I liken it to a new baby trying a new food, and for a few days, the bowel does some funky things with it. I told my kids to be patient, that this too shall pass (excuse the pun), and that this is an amazing victory in our lives.

It also meant not packing a special lunch to go to pizza birthday parties with. It opened up a whole new world.

What can be celebrated in your house today? It might not be of this magnitude every day. But any time we can do something we couldn’t do before, it’s an amazing moment for thankfulness. Running that marathon (or half-marathon). Strengthening those abs. Conquering that Rachmaninoff piece. Having something taken off an IEP. Or going off the IEP altogether. Getting through that tough year with a teacher/instructor you didn’t jive with. Training those puppies. Learning better food intake self-control. Choosing not to rage in traffic. Making that career change. Choosing not to gossip when the rest of the room is.

In our family, we thank God for these moments because we feel incapable of making such amazing changes in our own strength. We feel it all comes from Him. We are responsible for our choices, but at the end of the day, we like to look up to thank Him for guiding us.

Which victory in your life can you celebrate today?

Every good and perfect gift is from above, coming down from the Father of the heavenly lights, who does not change like shifting shadows.

But he was pierced for our transgressions, he was crushed for our iniquities; the punishment that brought us peace was on him, and by his wounds we are healed.

Posted by Bonnie Lyn Smith on August 28, 2014 in Living in Food Allergy Prison, The Healing Cloak of Jesus, Tweens/Children

← Yelling My Way up the Highway
Waiting for the Telephone Call →