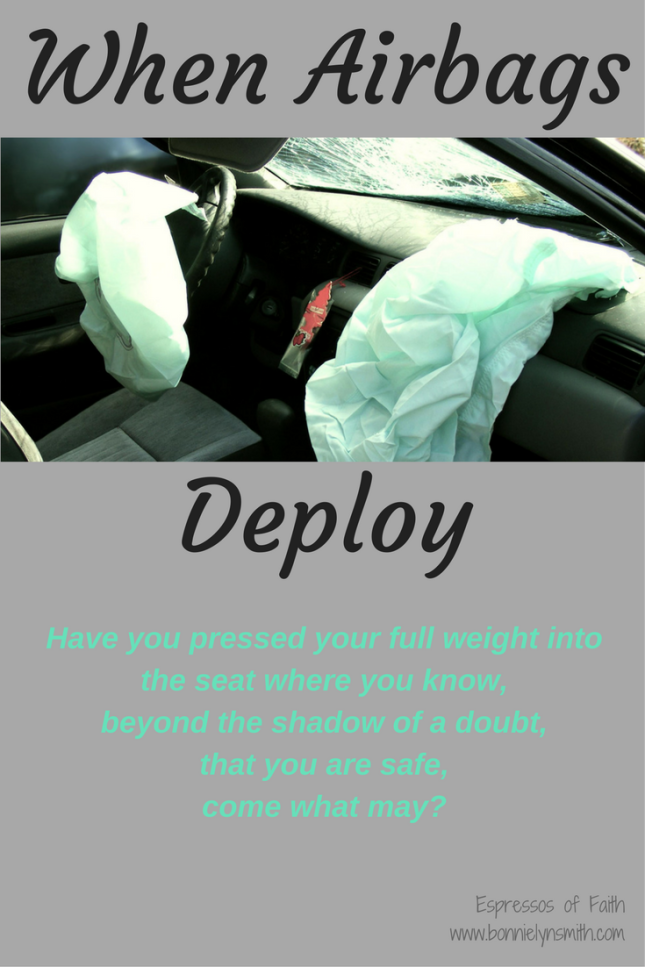 I was happily driving my daughter back from camp in Keene, NH. We “processed” the week, reminding the younger brother to not interrupt during this time, and by the time I pulled up to the traffic light at the end of the ramp to my exit, my mind was on unpacking, tadpoles going AWOL upon reaching froglet status in my house, and dinner. I pulled to a complete stop, waiting for that green left turn arrow. And there it was.

Awesome. Just a few miles to go. I entered the intersection gradually, only to hear my youngest son, Little Man, make a comment to get my attention as we both saw the sedan speeding toward us on our left, running the traffic light.

I remember crying out to Jesus. And waiting for a secondary crash that never happened. When the airbags went off around me and my daughter who was sitting in the front, I detected the classic burning smell as well as other fluids now leaking out of the car at a fast rate. I asked the kids to exit the car if they were able.

But then my own door wouldn’t open. Airbags trapped me. My brain was in slow motion. I remember the kids in view as they exited the vehicle, and then it registered that I was physically able to crawl across the debris to get out the passenger side.

For what seemed like forever, I stood there mumbling over and over again that there was a green arrow. My kids told me later that I repeated that many times as I trembled and tried to find more words. It was a full hour, an ambulance ride, and a few x-rays among us later before I could speak in full sentences. But we were okay.

A few more inches into that intersection, and the speeding car would have hit my driver’s side door more directly.

My Honda Odyssey did exactly what we trusted it to do in this accident. It bubbled us with airbags to ease the impact. Had my daughter been incorrectly sitting in the front passenger seat, had she not weighed what was necessary for the airbag sensor, it would have been a completely different story. I shudder to think of it, especially when I see the totaled van and the items within it tossed and shattered.

So, let me ask you something right now: END_OF_DOCUMENT_TOKEN_TO_BE_REPLACED

Posted by Bonnie Lyn Smith on August 12, 2017 in Ministry Moments, Relationship with God, Renewing Our Minds