RSS
← Mental Wellness: Paper Airplanes in Full Flight
“Don’t Let Anyone Look Down on You Because You Are Young” — Apostle Paul →

Kaylee: A Story of Cerebral Palsy, Tremendous Endurance, and A Heart That Always Draws a Smile 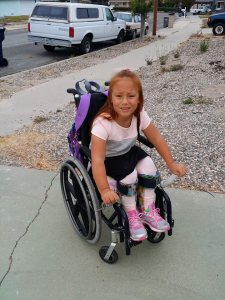 Espressos of Faith welcomes its second guest blogger. I first came to know Angelique (Angie) James and her family while living on Kwajalein Island, Republic of the Marshall Islands; our daughters were close in age and knew each other from school and community events. At the time, Dennis and Angie were expecting twins and preparing to head off island for the birth. [The hospital on Kwajalein was no longer set up for labor and delivery, so expectant mothers went off island to have their babies. Mothers of multiples had to leave the island sooner as a precaution.] Angie was healthy, and for really no explainable reason at all—except that because it sometimes just happens—twin girls arrived before Angie could be medivaced to Hawaii. Medical staff fought hard to keep the girls alive, but Kaylee lost her twin sister in the fight for her own life. What followed were many years of prayer, hope, and faith: a few steps forward and unfortunate setbacks. But along the way, Kaylee’s bright smile and amazing story impacted our island community and many around the world. God continues to show His amazing purposes for her life despite and through her disability. The James family still walks this road; it’s a trial ever before them. Angie so graciously offers her story (below) to shed a mother’s light and love on living with disability, build understanding and compassion in others, and honor her hero and mine, Kaylee. Here’s Angie…

Six and a half years ago, our youngest daughter, Kaylee, was born 13 weeks early. Weighing in at 2 pounds 4 ounces, doctors did not know if she would survive, but Kaylee proved to be a fighter then and still is now. When she was two years old, she was diagnosed with spastic hemiparetic diplegia cerebral palsy, which is a very technical way of saying that the cerebral palsy (CP) affects everything except her left arm. Many ask, “What is CP?”

The National Institute of Neurological Disorders and Stroke describes it as follows: “Cerebral palsy refers to a group of neurological disorders that appear in infancy or early childhood and permanently affect body movement and muscle coordination. Cerebral palsy is caused by damage to or abnormalities inside the developing brain that disrupt the brain’s ability to control movement and maintain posture and balance. The term cerebral refers to the brain; palsy refers to the loss or impairment of motor function. Cerebral palsy affects the motor area of the brain’s outer layer (called the cerebral cortex), the part of the brain that directs muscle movement. In some cases, the cerebral motor cortex hasn’t developed normally during fetal growth. In others, the damage is a result of injury to the brain either before, during, or after birth. In either case, the damage is not repairable and the disabilities that result are permanent.”

In Kaylee’s case, it was caused by severe brain damage when she was born. Once the brain is damaged, there is no way to repair it, but we can limit the impact that the brain damage has caused, to a certain extent. Through intensive therapy and a whole lot of hard work, Kaylee can retrain her brain, but the key is that it has to be done early in life while there is still brain development.

She endures daily therapy in order for her to retrain the brain and gain muscle memory. She is stretched so that the spasticity does not cause the tendons, ligaments, and muscles to shorten. Imagine stretching out a Charley horse; this is some three to four times a day on both legs and one arm. It is painful.

Then, there are the emotional pains:

Living with a disability is not easy, but I watch her fight every day to endure.

My six year old has a boatload of tenacity and spunk, and she is the type of child who lights up the room when she enters it. Recently, Kaylee has been going to aqua therapy, and the therapist told me, “I have never seen some of my patients smile, but when Kaylee enters the pool, she has them all smiling and having fun during therapy. She has fun, but she also works hard.”

I’ve always wondered where that spunk came from. Nothing gets her down; she is a very happy child. As I look at the struggles and pain that she endures on a daily basis due to Cerebral Palsy, I wonder how she keeps that positive attitude and smile. Many kids would throw out the “it’s not fair” line to anyone who would listen. Even children without disability say that—my 10 year old does, and she is a thriving, healthy child! God gave Kaylee a personality that was set to endure, and with this, I believe she will accomplish great things in her lifetime.

I have learned so much from my spunky little girl. She had made me see things through a light of gratitude for the simplest things. I am grateful that I can learn from her. She is an amazing blessing!

The James Family is participating in the Steptember fundraiser for United Cerebral Palsy. For more information/donations, please refer to:
https://event.steptember.us/donate/onbehalfof?id=b0144a60-52e3-4b2d-ab0c-b7418bbc22a1#.VAozc7mX2WQ.facebook 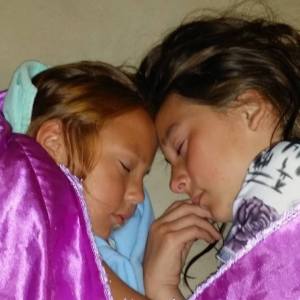 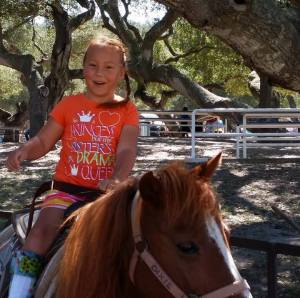 ← Mental Wellness: Paper Airplanes in Full Flight
“Don’t Let Anyone Look Down on You Because You Are Young” — Apostle Paul →

One response to “Kaylee: A Story of Cerebral Palsy, Tremendous Endurance, and A Heart That Always Draws a Smile”